I was having an issue with SCCM 2012 SP1 with a PXE boot problem.  When workstations attempt to boot from my SCCM 2012 deployment point they receive the following error:

Your PC needs to be repaired.
The Boot Configuration Data for your PC is missing or contains errors.

In the SMSPXE.log file on the SCCM Deployment point server the following error is being experienced which is spammed over and over.

Now I only have a x64 boot.wim file which I have deployed to my deployment point.  This boot.wim is the default x64 one taken of a Windows 8 DVD Media.  From my reading on the following forum thread, apparently this is a known problem with SCCM 2012 SP1.  What I have leant from the following forum thread is you MUST HAVE both a x64 and a x86 boot image deployed to your deployment point servers, even if your only using x64 like in my case.  This is also in alignment with the error which I am receiving in the SMSPXE.log file "Matching Processor Architecture Boot Image (0) not found" which would hint there is no x86 boot image deployed.

Now I went to upload a 32bit boot image from a Windows 8 32bit edition media however when ever I upload a 32bit media, I receive the following error:

"You can not import this boot image.  Only finalized boot images are supported.  For more information press F1." 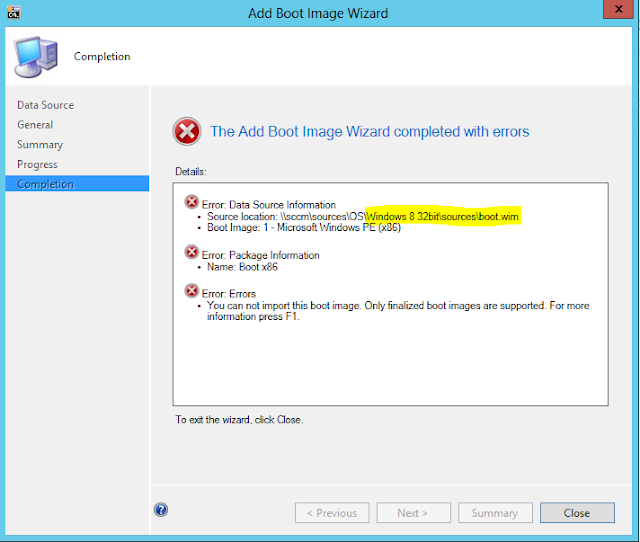 It is important to note that 64bit Windows 8 boot media adds without a problem.
Also important, I received the following error when attempting to add a Windows 7 x64 boot media.  From my research I found that SCCM 2012 no longer supports the old WinPE 3.0 (which comes with Windows 7) and as a result you need to use a Windows 8 boot.wim file.  I blogged these findings here:

This hotfix as of this writing must be requested from Microsoft in which they email you a link to download the hotfix.  Apply this update to SCCM servers in your central administration site, primary site, secondary site, providers and configuration manager consoles. 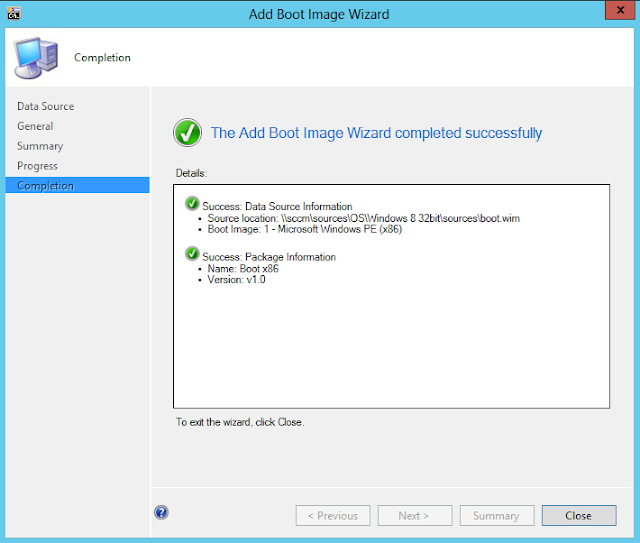 Posted by Clint Boessen at 7:42 PM