LDP.exe is a useful tool for querying information out of Active Directory, in particular performing searches.

To perform a search using LDP.exe perform the following actions:

1. Open LDP.exe, go to connection and click Connect. Type in the address of one of your domain controllers.

2. Click connect and go to bindings. Enter a user name, password and domain name to which you want to connect with.

3. Click Browse and then click Search. In Base Dn enter the location in which you want to start searching from. Under filter type in a filter, I said any objects in active directory containing the msExchHomeServerName attribute, and if the attribute contains anything return the results. Also click subtree, this means it will search all recursive tree's in the LDAP structure. 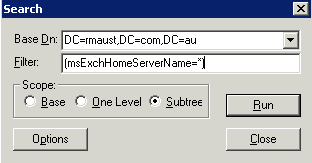 4. Click Options. Under Attributes specify which attributes you want to return for each object found meeting your search query. 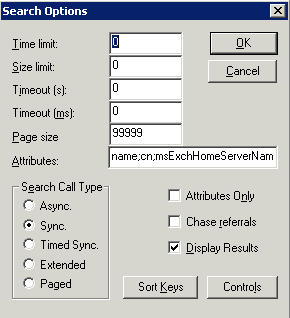 Microsoft KB224543 has lots more information about this:

I had a Windows Server 2008 x64 server where I could not go to server manager roles or features. I would get the following error message:

Unexpected error refreshing Server Manager: No signature was present in the subject. (Exception from HRRESULT: 0x800B0100) 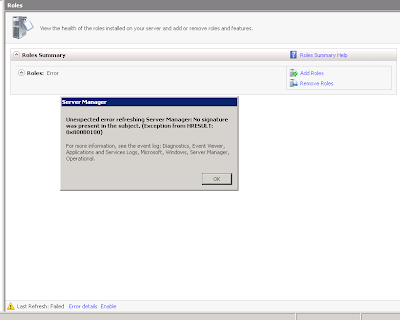 I then checked the CBS logs (%windir%\logs\cbs\cbs.log):

Throughout the log file in random locations it kept repeating:


I then went and downloaded the "System Update Readiness Tool" which checks the CBS component corruption. After it finished running it dumps its results to C:\Windows\logs\CBSCheckSUR.log. In this log file it also mentioned the same KB article as the corrupt one above: 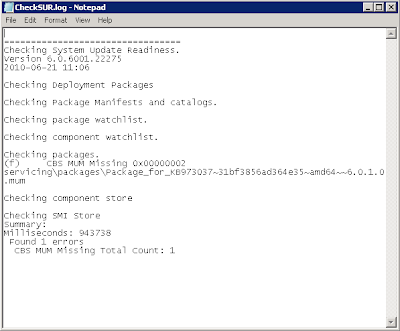 It was now determined that the cause of the issue was from microsoft update KB973037. I went and manually downloaded the update from:

These renamed files need to be copied to:

However by default Administrators does not have access to this folder as all installations are done by the user account "TrustedInstaller". This is because standard user accounts can also install updates (if you allow them to with group policy). To give administrators full control take ownership of the packages folder, set permissions to full control, then give folder ownership back to TrustedInstaller! This is important - if "NT SERVICE\TrustedInstaller" is not owner updates can fail to install.

Now that you have access, copy the two files you renamed into this directory. 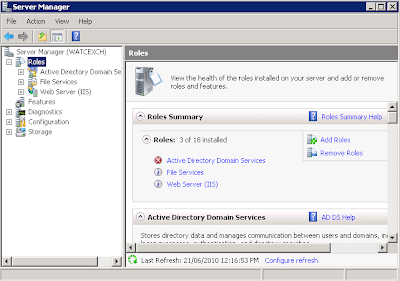 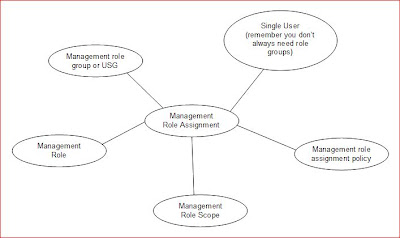 In addition to logging events in the Application Event log, Folder Redirection can provide a detailed log to aid troubleshooting. To create a detailed log file for folder redirection, use the following registry key:

Note The log file can be found at: %windir%\debug\usermode\fdeploy.log

In pre-Vista versions of Windows, doing this will create the diagnostic log file %windir%\Debug\UserMode\fdeploy.log. For Vista, 2008 and Windows 7 however, doing this simply adds more detailed info to the event log.
Posted by Clint Boessen at 8:36 PM No comments:

How to Enable Mailtips In Exchange 2010

If you are not up to speed on Mailtips I suggest you reading this article by the MS Exchange Team:

To enable Mail Tips you need to use powershell with the Set-OrganizationConfig cmdlet. There are various components of mailtips you can enable or disable.

- MailTipsAllTipsEnabled. Controls whether MailTips are enabled. The default is $True.

- MailTipsGroupMetricsEnabled. Controls whether MailTips that depend on group sizes are enabled. The default is $True.

- MailTipsLargeAudienceThreshold. Controls the threshold for the number of recipients on a message before MailTips flags it as large. The default value is 25. This value is probably too low for large organizations, where big distribution groups are common. In this scenario, it makes sense to increase the value to 50 to stop MailTips from nagging users for no good reason.

- MailTipsMailboxSourcedTipsEnabled. Controls whether MailTips that depend on mailbox data such as out-of-office notices are enabled. The default is $True

Note: If all are enabled, it will increase load on your client access servers by 5%.
Posted by Clint Boessen at 7:05 PM No comments:

This is what the Microsoft Exchange Writer looks like should it come up:

If it does not come up in the list... to enable it navigate to the following registry key:

Modify the "Disable Exchange Writer" registry key to a value of 0.

After this restart the "Exchange Information Store" service.

In this blog post I wish to run through two key areas most Exchange Administrators do not know or have not come across with Exchange 2010. These are in my eyes, limitations in the product and need to be taken into close consideration when planning an Exchange 2010 enterprise infrastructure. As they are limitations to the product, it has not been documented very well by Microsoft and supporting Exchange communities.

As I illustrated previously, up to 16 servers can be a member of a DAG. Exchange mailbox servers have their own replication engine for replicating database transaction logs between servers running on TCP 64327 by default (can be changed). However there is no logic between this replication - take the following diagram for example. 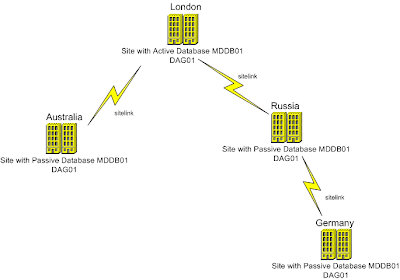 Here is a DAG with only a single mailbox database. A passive copy of this database lies in every remote site. With DAG replication there is no smarts, there is no bridgehead server, no way of optimising which way replication traffic should go. The active mailbox database MDDB01 lies in London. This database is replicated everywhere. It needs to get to both Russia and Germany. Instead of copying it from London to Russia then Russia to Germany, it will copy it from London to Russia then London to Germany meaning the replication traffic needs to pass over the London to Russia path twice! This is something they may improve in the next version of exchange.

You can enable "encryption" and "compression" of replication traffic using powershell... the compression can help a little keeping bandwidth down.

In Exchange 2010 your outlook clients talk to a Client Access Server for MAPI connectivity. The CAS then passes the requests on to the mailbox server. When you open outlook for the first time, Autodiscover will setup your outlook profile providing you with the closest CAS server to where your mailbox resides. These can be CAS Arrays, A bunch of CAS servers in a load balanced scenario.

What happens if you have a remote site with a single all in one exchange box running Mailbox, Hub Transport and Client Access roles that's a member of DAG replication for backup and off site recovery, and that server failed. Would users automatically fail over? The answer here is no. The reason being is because the DNS name they are pointing to is the local CAS server in that site, which in this instance is not highly available. The CAS server must be a member of a CAS Array to achieve automatic high availability. However saying this, the mailbox database is still online, as the next site in the priority list holding the passive copy has now become active. If the outlook clients changed their exchange server address to another CAS server in the organisation that is online, they will be able to get onto their email! Note that Outlook Anywhere/Outlook Web Access and Active Sync will always be highly available.
Posted by Clint Boessen at 9:51 PM No comments:

I had an exchange 2003 server connected to a SAN using fibre channel. The LUN containing the mailbox database failed. When opening system manager and clicking on the storage group, the following error pops up: