I'm about to sit the Exchange Upgrade Exam (MS-202: Microsoft 365 Messaging Administrator Certification Transition) on Friday and currently doing a last minute brush up.  Having done all the certifications in Exchange Server since MCSE: Messaging 2003 all the way through to the latest Exchange 2016 exam (70-345) I know the types of Questions Microsoft has asked in the past.

One area tested that I recall from all previous exams was the process for preparing schema and domain...

Whilst the latest Exchange 2019 Exams are definitely going to be heavily focused on Exchange Online in Office 365 given this is Microsoft's primary drive, they also test on all the on-premises content.  I wouldn't be surprised if topology preparation is tested once again... even though in my professional opinion it is not an item of significant importance given that over 99% of businesses simply rely on the Cumulative Update wizard to automatically extend the schema and prepare the domains.

In Exchange 2003 we had the setup.exe /forestprep and setup.exe /domainprep.

From Exchange 2007 all the way to Exchange 2019 we have a number of commands now including:

I remember there use to be a fantastic article on TechNet which gave a breakdown of exactly what each of these commands did - however after spending a good 5 minutes on Google i came up short trying to find the article and not sure if it is still published.

I could find no "clear" breakdown of each of these commands and the descriptions given on the installer help is useless as shown below: 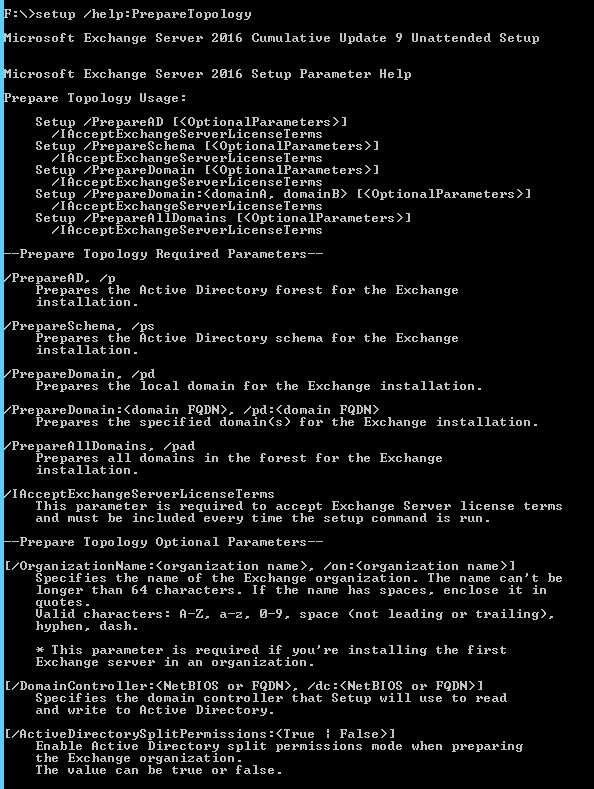 I did come across the book however Exchange Server 2010 Administration: Real World Skills for MCITP Certification and Beyond (Exams 70-662 and 70-663) published by Joel Stidley and Erik Gustafson that touched on these commands in more detail.

This command does one thing, prepares the schema (additional class objects and attributes required for Exchange Server).  It must be run in the same Active Directory site as the Schema master.

To run this command you must be a Schema Admin.

To run this command you must be an Enterprise Admin.

For a single forest, single domain environment - PrepareAD is the only command you need to run.

If you have multiple child domains or new tree domains in the same Forest, after you run /PrepareAD in the forest root domain, you will need to /PrepareDomain for each of the additional domains within the forest.

To run this command you must be an Enterprise Admin and a Schema Admin.

If you have multiple domains in an Active Directory forest and you wish to run /PrepareDomain across all domains at the same time, this is what the /PrepareAllDomains command is for.

Hopefully this post has been useful.
Posted by Clint Boessen at 9:33 PM No comments:

In June 2010, I wrote an article explaining how Exchange Role Based Access Control (RBAC) works - a new feature released with Exchange 2010.  RBAC is still heavily utilised today with Exchange 2019 and Office 365 following these principals.

After having not worked with RBAC for while, I found myself re-reading the principals of RBAC and re-running through what is involved to configure the security model.  Knowing this well is also essential and I'm doing my Exchange upgrade exam this Friday (MS-202 Microsoft 365 Messaging Administrator Certification Transition) so a refresher on these principals is always handy!

I had a requirement given to me by a customer which I need to spin up in my test lab, and I thought whilst I lab the requirement it might be a good idea to write a quick blog post on the process of implementing the RBAC changes.

With the design of RBAC, The Exchange Product Team referred to RBAC as the Triangle of Power.  This is elaborated in this blog post here:

The security model has three arms:
This all glued together by a concept known as Management Role Assignments. 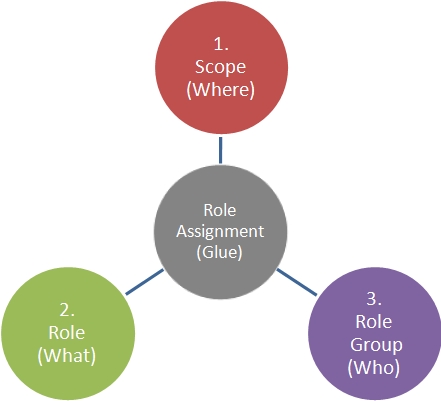 I will break this down using my three headers listed above.

In my lab environment we only want contact objects to be changed under the OU "Contacts".

I'm locking it down to the Organisational Unit based on a RecipientRestrictionFilter with the following query:

There are a few rules you need to understand when creating new Management Roles for the "what section":
Base on these two rules, when your creating a new Management role your essentially taking a management role similar to what your trying to create "with too much access", and removing the additional access from the role.

So the first step I need to do is find an existing Management Role that contains the two cmdlets I'm interested in.  I did this by running the following cmdlets: 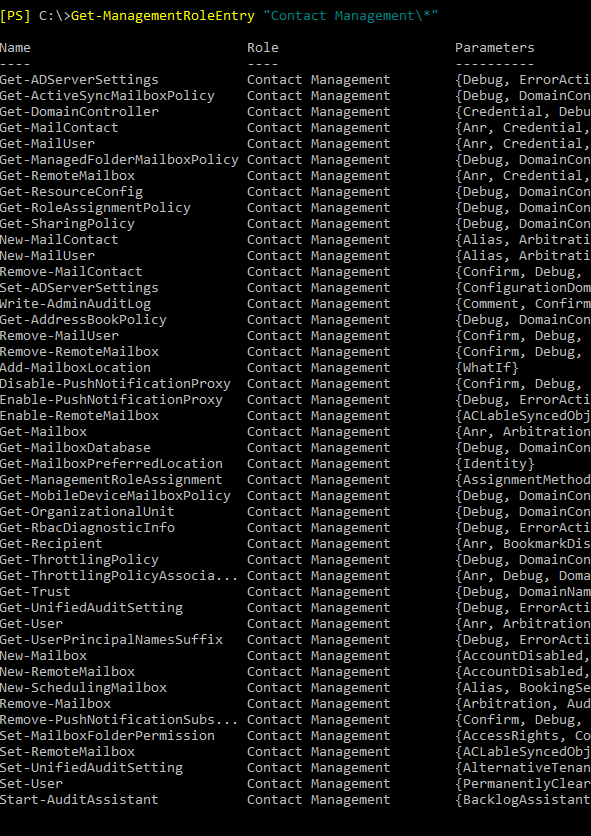 We want to remove all cmdlets not related to our Contact Management.  Most importantly we want to remove any cmdlets with "New-, Set-, Start-, Remove-, Disable-, Write-, or Remote-" as they have elevated access.  "Get-" cmdlets you cant make changes, you can only view data.

To remove the unwanted cmdlets from the Contact Management Management Role the following cmdlet was used: 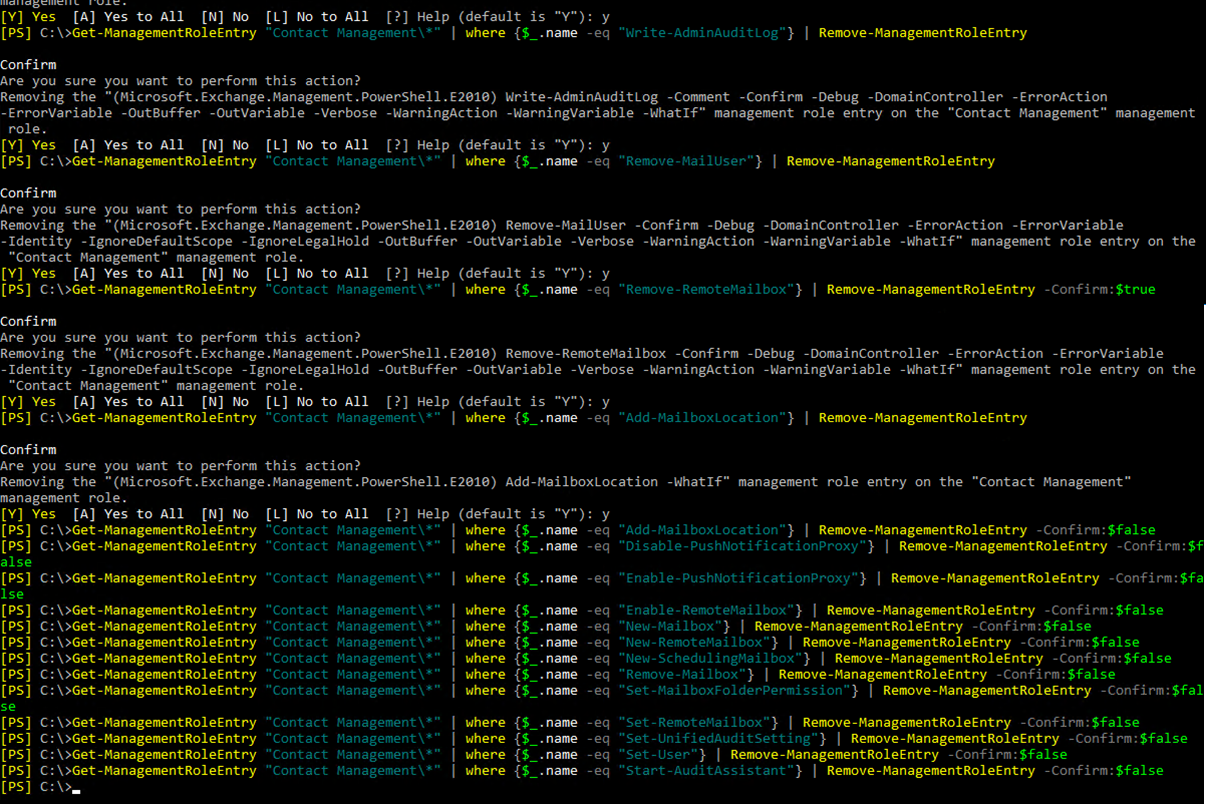 And a few Get- commands I wanted removed:

This left the Contact Management role with the following cmdlets associated:

This left Management Role access to run the following cmdlets.  The "Get-" commands present cannot make any changes or expose any information that I would not want the delegated user to see.  As a result I didn't clean these up but you can if you want.  Most importantly, the New-MailContact and Remove-MailContact cmdlets were left present.

The last step is the "delegation of control", which staff members will have access to be able to run the Cmdlets in the Management Role "Contact Management".

This creates a new Group under Microsoft Exchange Security Groups in Active Directory for the new Role Group. 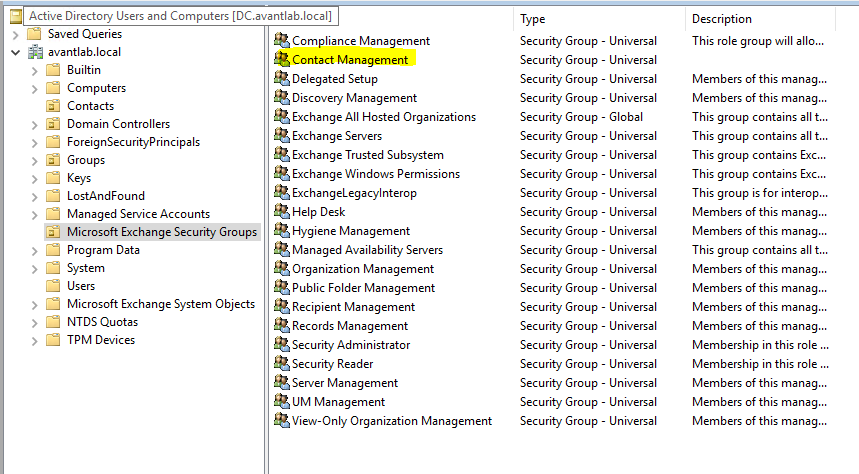 I went and added a user called DelegationUser to the Contact Management Admins group. 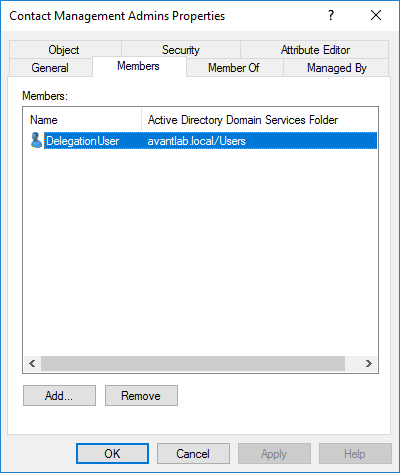 Logging into Exchange Control Panel (now known as Exchange Admin Centre (EAC) in later revisions of the product), the webpage only renders the areas of EAC the user has access to.  RBAC and being "Cloud Friendly" are the two primary reasons the old Exchange Management Console from Exchange 2007/2010 was retired. 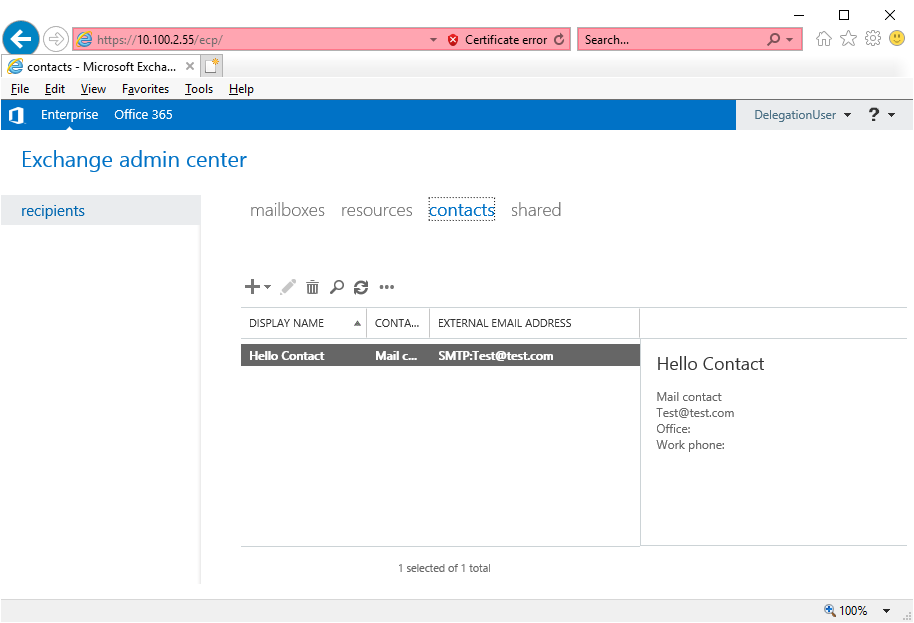 The user can successfully run the New-MailContact command via the webpage and place a Contact object under the Contacts OU - the Step 1: Where? section. 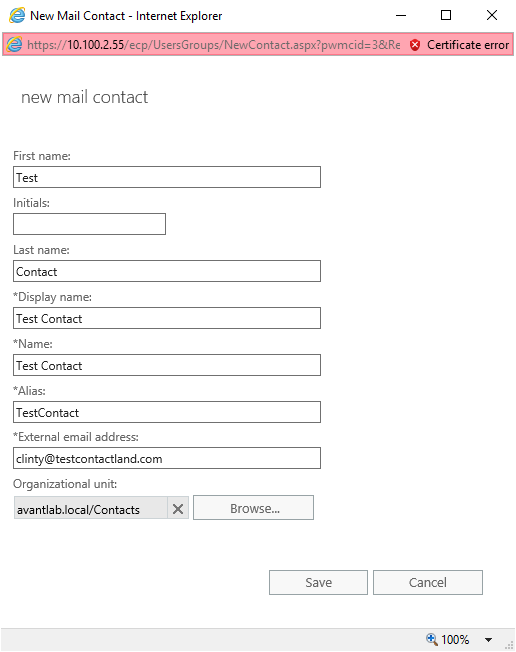 This is shown in the following screenshot: 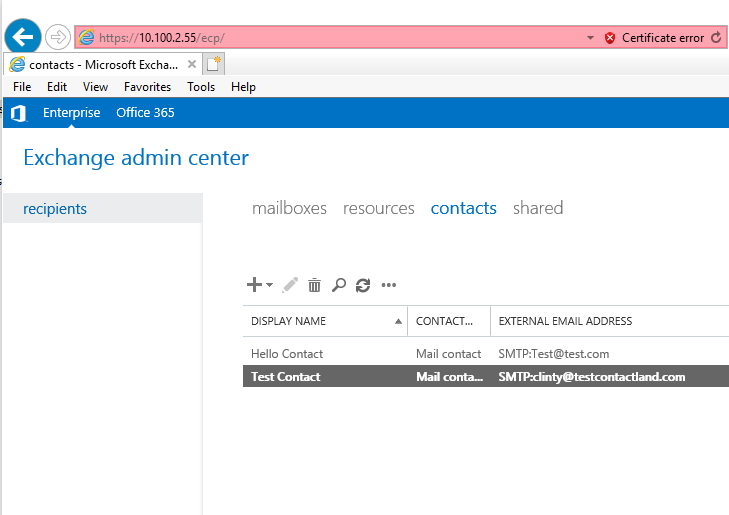 However if I try and create a contact in the default Users container, I get the message: 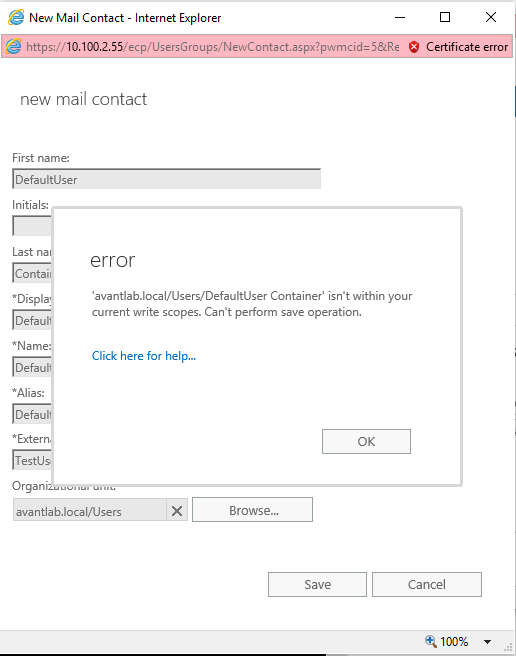 This is because Step 1 "Where"... the management scope is restricted to only the Contacts OU.  Obviously Management Scopes are ridiculously granular and you can go far beyond restrictions of something as basic as an OU.


What about the Glue?

Stop sniffing the glue Clint, I thought there was Glue in between holding these objects together as shown in the diagram below.

Creating ManagementRoleAssignments manually useful especially when you want to create associations between existing objects that already exist on the system.

If we look at the Management Role Assignment "i.e. the glue" closer, we can see that it has all three components created above are "glued" together. 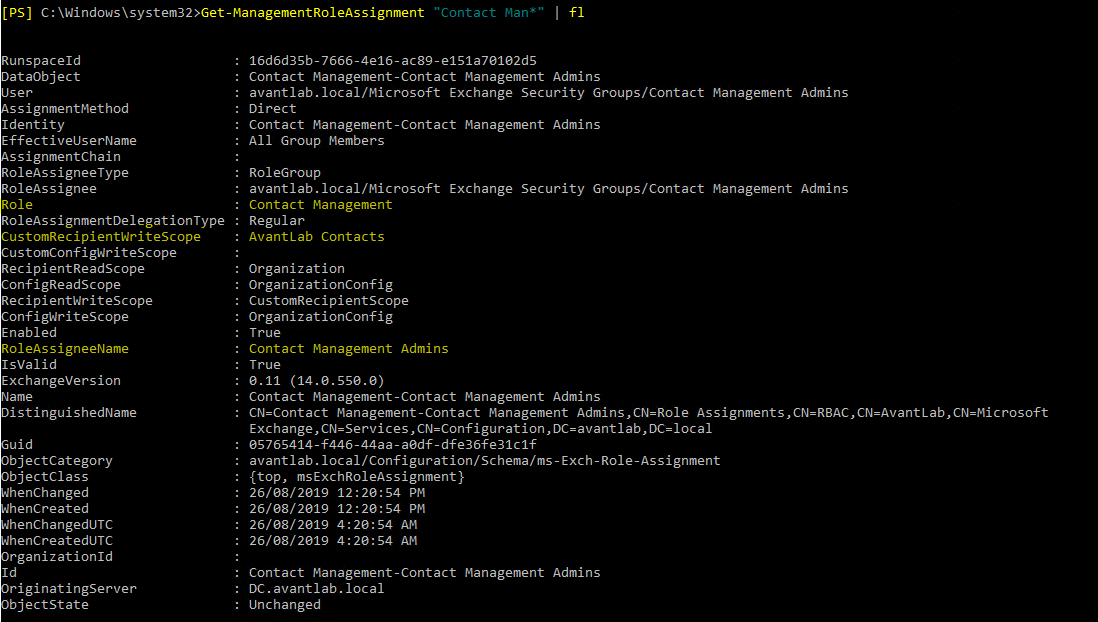 Hopefully this step by step guide to using Role Based Access Control was useful and can be put to use within your environment!
Posted by Clint Boessen at 1:37 AM No comments: