OWA 2010 - You don't have permission to open this page 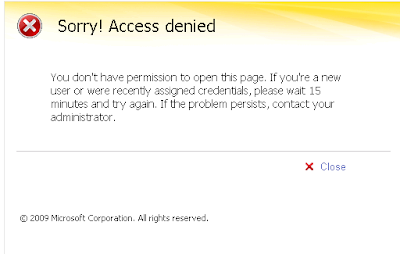 You don't have permission to open this page. If you're a new user or were recently assigned credentials, please wait 15 minutes and try again. If the problem persists, contact your administrator.

This resolved the problem!
Posted by Clint Boessen at 10:14 PM 11 comments:

Below is an easy way to quickly identify all attributes on an AD Object using adFind.exe by Joe Richards. 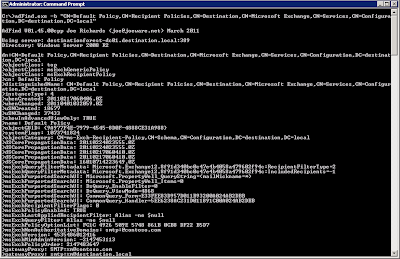 Posted by Clint Boessen at 8:48 PM No comments:

I created an Outlook PRF file with the following configuration:

I attempted to import the PRF into Outlook 2010 using the following command:

During the import the following error was experienced: 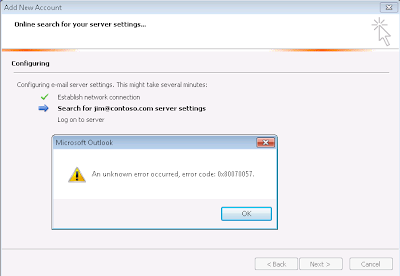 After installing the following hotfix my problem was resolved:

This is due to the difference of the schema versions, some attributes are not migrated to target domain.

For more information about this see the article below "Migrating and Restructuring Active Directory Domains Using ADMT v3.1"

I require the hotfix Cumulative update package 4 for SQL Server 2008 documented under KB963036.

I sent in a request for the hotfix, Microsoft emailed me the download link. I retreived the file 374964_intl_x64_zip.

When I run it and attempt to extract the archive I get the following message.

"The self-extracting zip file is part of a multidisk zip file. Please insert the last disk of the set." 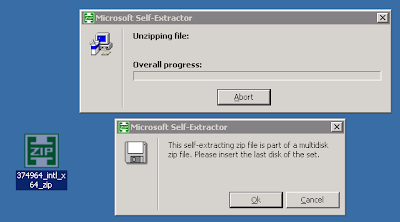 I am given no option other then to press OK. When I press OK three times I get the following error:

"An error occured while unzipping. One or more files were not succesfully unzipped. The error code is 110."

I believe there may be something wrong with the hotfix. I contacted Microsoft using the appropriate Security Essentials portal for hotfix related problems.

I will update this post when I hear back from Microsoft with the solution.

I redownloaded the hotfix and it now works! 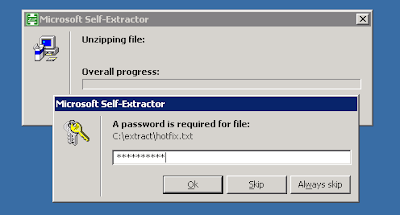 What's the difference between SSL Bridging and SSL Tunneling?

Many firewalls on the market support the concept of SSL Bridging and SSL Tunneling. Microsoft firewalls that support this functionality include:
- Internet Security and Acceleration (ISA)
- Forefront Threat Management Gateway (TMG)

What is the difference between SSL Bridging and SSL Tunneling?

SSL Bridging involves decrypting the traffic on the firewall, inspecting the HTML code and filtering it for malware and any content policies that may be applied. The traffic is then re-encrypted usually using a different certificate provided by an Internal Certificate Authority and passing it onto the end client.

SSL Tunneling involves relaying the traffic unmodified still encrypted with the digital certificate to the end client. No filtering can be applied when a router is configured with SSL Tunneling.

Some companies may not wish to have SSL Bridging configured. When dealing with sensitive traffic such as online banking, I for one would be very concerned if I saw the SSL traffic coming to me with a certificate from an Internal Certificate Authority!
Posted by Clint Boessen at 12:07 AM 2 comments:

Below shows you how to view an users GUID in Windows Server 2003. 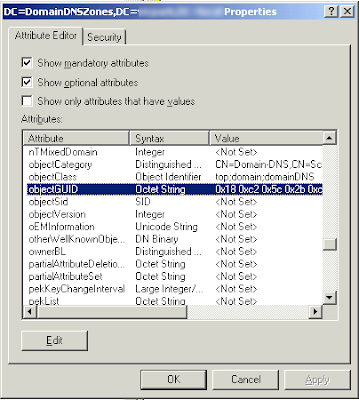 In Server 2008 ADSIedit GUID attributes are now displayed in a readable format. 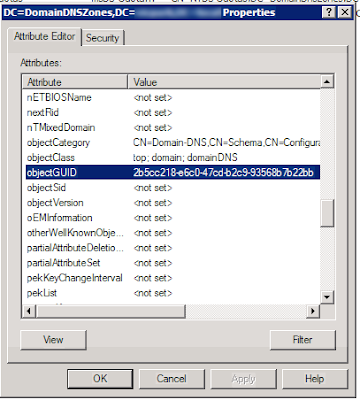 If you only have Server 2003 how can you read the GUID on Active Directory objects? Use the following script, here we are finding the GUID of my user account on my KBOMB domain.

When I run the visual basic script I get my GUID.

I also have code here for converting SID from octect, hex or binary to String values. This script was developed by a guy named Richard who is an MVP in Microsoft MVP Scripting and ADSI.

Datacenter Activation Coordination (DAC) mode prevents split brain syndrome from occurring by including a protocol called Datacenter Activation Coordination Protocol (DACP). After a catastrophic failure, when the DAG recovers, it won't automatically mount databases even though the DAG has a quorum. Instead DACP is used to determine the current state of the DAG and whether Active Manager should attempt to mount the databases.

Datacenter Activation Coordination (DAC) mode is disabled by default.
DACP was created to address this issue. Active Manager stores a bit in memory (either a 0 or a 1) that tells the DAG whether it's allowed to mount local databases that are assigned as active on the server. When a DAG is running in DAC mode (which would be any DAG with three or more members), each time Active Manager starts up the bit is set to 0, meaning it isn't allowed to mount databases. Because it's in DAC mode, the server must try to communicate with all other members of the DAG that it knows to get another DAG member to give it an answer as to whether it can mount local databases that are assigned as active to it. The answer comes in the form of the bit setting for other Active Managers in the DAG. If another server responds that its bit is set to 1, it means servers are allowed to mount databases, so the server starting up sets its bit to 1 and mounts its databases.

To enable DAC mode use the following powershell command:

To view weather DAC mode is enabled you may run:

This will say either Off or DagOnly
Posted by Clint Boessen at 9:01 PM 1 comment:

When specifying the logon script via the user account ensure you do not enter a full UNC path.

The logon script field in the user account properties automatically points to the netlogon directory.
Posted by Clint Boessen at 12:35 AM 6 comments:

The publisher could not be verified.

When running scripts of network shares you may receive the following warning:

The publisher could not be verified. Are you sure you want to run this software? 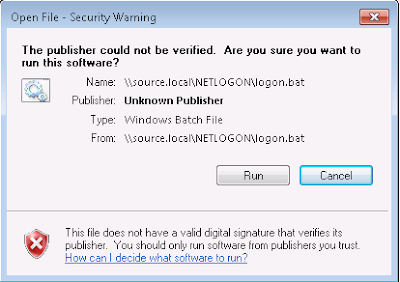 This prevents the logon script from automatically running when a user logs into their workstation. 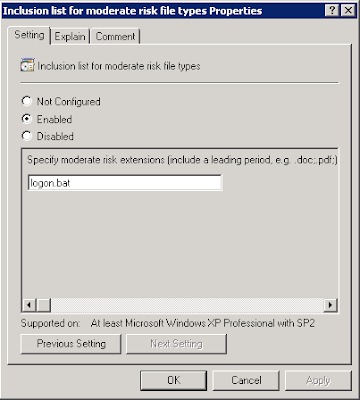 You can also use wild cards such as *.bat and comma's to separate entries.
Posted by Clint Boessen at 12:10 AM No comments: 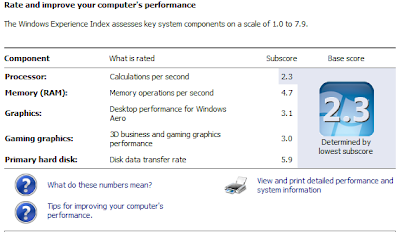