DNS Host A Record Being Deleted on Server Reboot

After updating a few DNS client settings on member servers, our customer complained that when they rebooted these servers, the member servers Host A record in DNS disappeared.  This issue only occurred with 2008 and 2008 R2 member servers, 2012 servers were not affected.

After looking into this issue, we found that there is a bug with the DNS client in Server 2008 and Server 2008 R2.  Windows Vista and Windows 7 clients are also effected.  This bug is documented under KB2520155 and Microsoft has released a hotfix.

The issue is simple, as per the Microsoft KB article:

To get the member server to re-register itself in DNS, you must perform one of the following actions:
After the dynamic registration is re-created the record will not delete unless the DNS client addresses are again changed on the server.

For this customer we did not install the patch, we simply performed an ipconfig /registerdns on any servers 2008 R2 servers after their DNS client was updated and server was rebooted.
Posted by Clint Boessen at 11:08 PM No comments:

The folders cannot be queried. Element not found.

The folders cannot be queried. Element not found

After some investigation it turns out that the error was due to a setting the customer had configured:

"Exclude targets outside of the client's site". 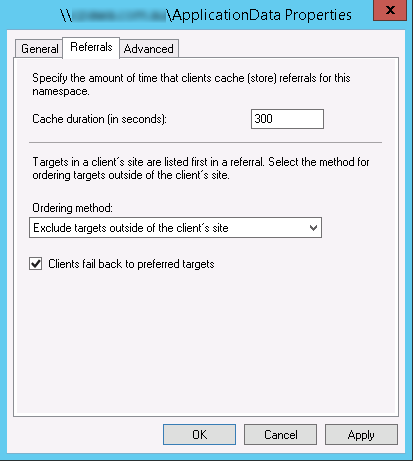 After changing the Ordering method back to "Lowest Cost" and waiting 120 minutes for AD Replication and the DFS Namespace to refresh, we were able to configure the DFS Namespace server at the remote site.
Posted by Clint Boessen at 10:34 PM 83 comments: