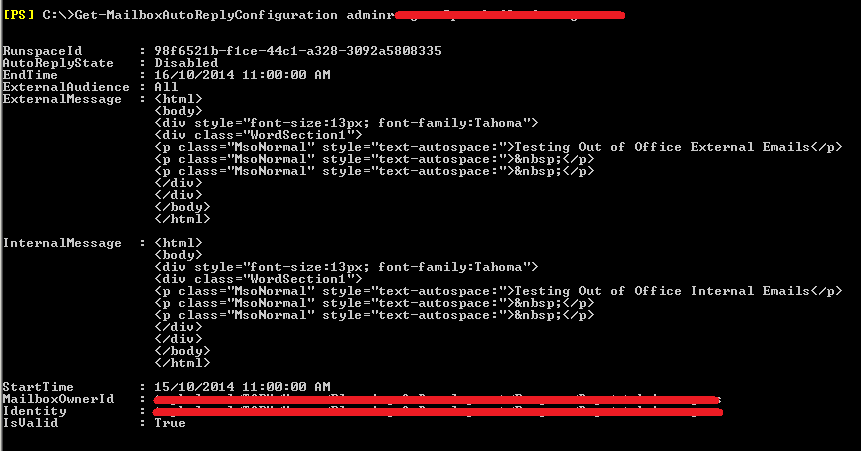 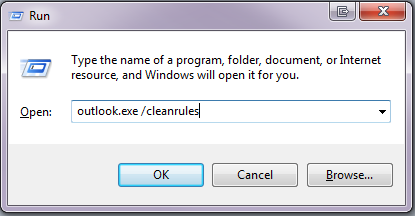 Please leave your comments if you also experience this issue.
Posted by Clint Boessen at 9:34 PM 2 comments:

Today I had an issue moving a mailbox from Exchange 2007 to Exchange 2010 where the following error was generated in Exchange Management Shell. 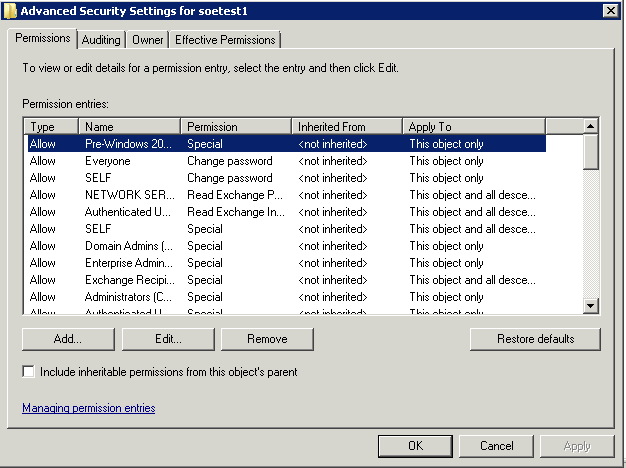 After making this change the move worked as expected.

Back in 2009 I wrote an article called "Configuring Outlook Anywhere Settings via Autodiscover" which can be found at the following URL:

Also in 2009 I wrote an article called "Outlook Anywhere keeps prompting for Password" which can be found at the following URL:

In this blog post I am going to touch on these two topics a bit further as this issue will impact many organisations moving to Exchange 2013 for those still running Windows XP (despite the fact it is no longer supported) seeming Exchange 2013 only supports RPC over HTTP or MAPI over HTTP (out of scope for this article).  To recap what I wrote about in the previous articles 5 years ago, for RPC over HTTP(s) aka Outlook Anywhere to work on any version of the Outlook Client on the XP, the MSSTD value must match the "Common Name" on the certificate.  What am I talking about?  Well let me show you...

The MSSTD is specified under "Only connect to proxy servers that have this principal name in their certificate" which can be found within Outlook under Account Settings, Open the Account, More Settings, Connection Tab and finally Exchange Proxy Settings. 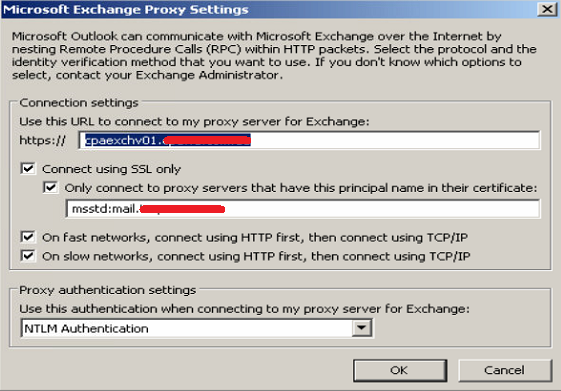 This value must match the "Common Name" of the certificate which in this example is mail.example.com as shown below next to "Issued to:" 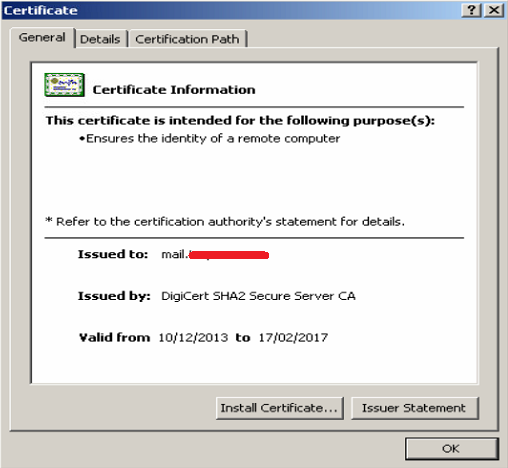 From Windows Vista onwards the MSSTD can match any name in the Certificate which includes the Certificate Common Name as shown above and any Subject Alternative Names (SAN) which may exist on the certificate.  These are often used and can be easily located on the details tab of a certificate in Microsoft Windows as shown below: 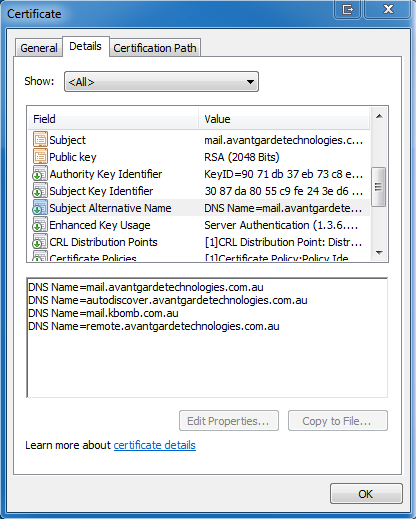 For Windows XP the "Only connect to proxy servers that have this principal name in their certificate" value MUST MATCH the common name on the Certificate.  The symptom for having this not matching is the user continuously being prompted for credentials in an infinite loop as I addressed under the article Outlook Anywhere keeps prompting for Password.
Note: This also applies to Windows Server 2003 for people with legacy Terminal Server / Citrix environments.
What about for Wild Card certificates, how do I set the "Only connect to proxy servers that have this principal name in their certificate" MSSTD value for these for legacy Windows XP clients?
For Wild Card certificates the MSSTD value must be set to:
msstd:*.domain.com
You must actually put the astricts in the DNS name instead of the name the client is connecting to in order for Windows XP to be happy so it matches the exact name of the Wildcard certificate.
What about Autodiscover?
Now that we understand that the MSSTD must match the common name of the certificate for our legacy Windows XP clients, how do we automatically push this out to our clients via Autodiscover?
Exchange 2013 no longer directly uses EXPR/EXCH Outlook Providers which we configured in Exchange 2007/2010, it has two different dynamically generated EXHTTP providers. Users with mailboxes on 2013 will get one set of EXHTTP settings for internal usage and one set of EXHTTP settings for external usage.  You will see this returned to the Outlook client in the Autodiscover response via what looks like a new provider, ExHTTP.
However ExHTTP isn’t an actual provider, it is a calculated set of values from the EXCH (internal Outlook Anywhere) and EXPR (External Outlook Anywhere) settings.  The concept of internal Outlook Anywhere and External Outlook Anywhere is new in Exchange 2013 as we
got rid of direct RPC to the Exchange server.  We want the ability to set NTLM authentication for internal and Basic authentication for External as well as different connection URLs.
To change the internal MSSTD returned value from Autodiscover use the following command:
Internal Outlook Anywhere:
Get-OutlookProvider "EXCH" | Set-OutlookProvider -CertPrincipalName "msstd:mail.domain.com"
External Outlook Anywhere:
Get-OutlookProvider "EXPR" | Set-OutlookProvider -CertPrincipalName "msstd:mail.domain.com"
If you have a private internal namespace such as .local, .lan or .internal you may also need to setup split horizon DNS so that you can make the Certificate Common Name match the MSSTD!
Hope this article has been helpful.
Posted by Clint Boessen at 10:16 PM 4 comments:

Setup Wizard for Update Rollup 7 for Exchange 2010 Service Pack 3 (KB2961522) ended prematurely because of an error.  Your system has not been modified.  To install this program at a later time, please run the installation again. 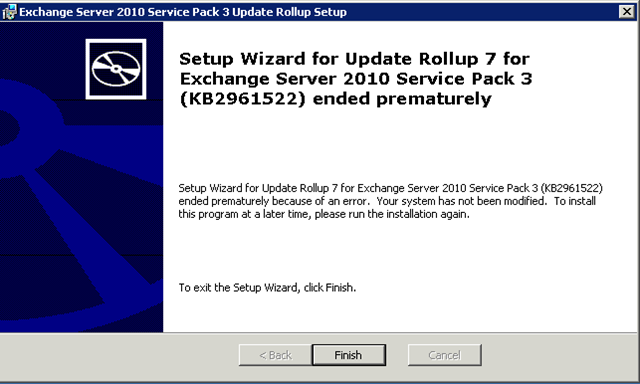 This error was encountered after running the Exchange2010-KB2961522-x64-en.msp file downloaded from the Microsoft Website.

In the ServiceControl.txt file located under C:\ExchangeSetupLogs the following errors were present:

Generally when you run a .msp update file it automatically provides an User Account Control (UAC) exception however on this customers network it did not.  As a result UAC prevented the update from performing the required tasks.

To resolve the problem I simply needed to run the update from an elevated command prompt window as follows:

Cannot bind argument to parameter 'Identity' because it is null 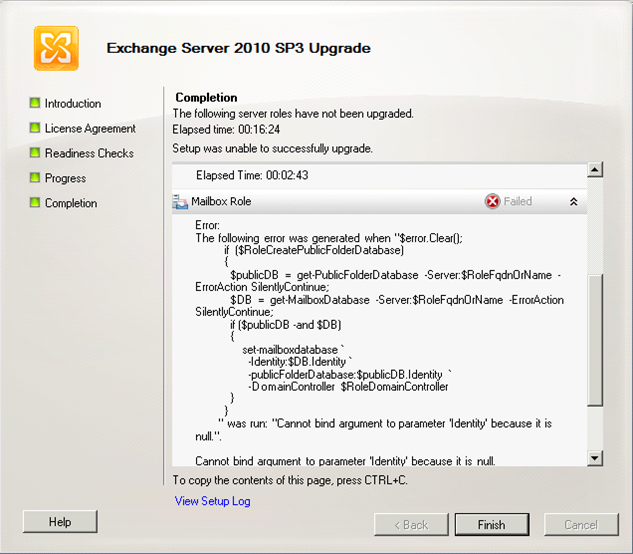 If you received this error you most likely also received:

This error occurs if the original Exchange 2010 SP1 or SP2 installation did not finish "Finalizing Setup" which is the final stage in the installation process.  Failure means important registry keys are not set correctly.  In my case the Finalizing Setup did not complete because of the following error:

Simply create the string value called ConfiguredVersion and give it the same value as UnpackedVersion as shown in the following screenshot:

After this I deleted the Exchange 2010 SP3 installation watermark (both the “Action” and “Watermark” entries in the registry) and re-ran setup.  Google for this, lots of information already available on the Internet
Posted by Clint Boessen at 8:35 PM 1 comment: 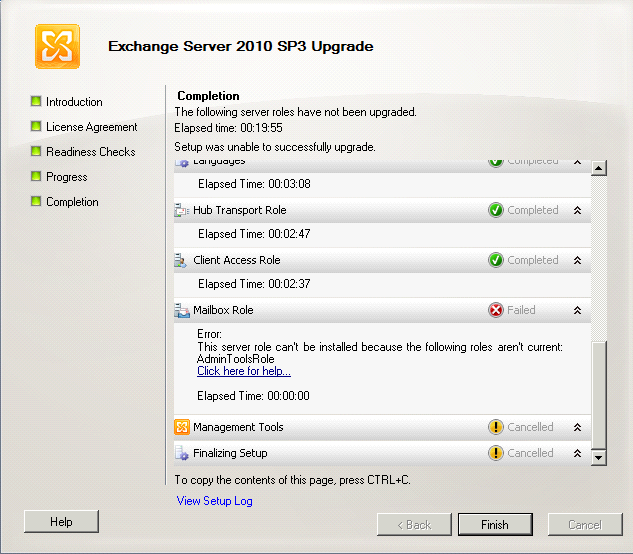 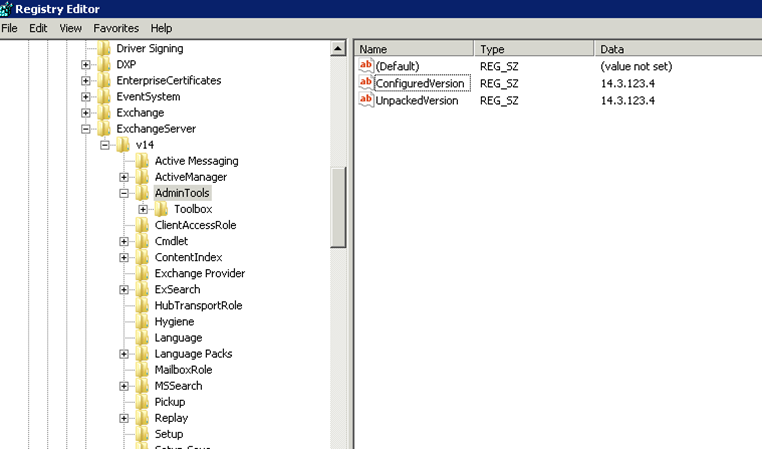 After this I deleted the Exchange 2010 SP3 installation watermark (both the “Action” and “Watermark” entries in the registry) and re-ran setup.  Google for this, lots of information already available on the Internet.
Note: If you experienced this error you may also experience the following:
http://clintboessen.blogspot.com.au/2014/10/cannot-bind-argument-to-parameter.html
Posted by Clint Boessen at 8:17 PM 1 comment:

Couldn't resolve the user or group "domain.local/Microsoft Exchange Security Groups/Discovery Management." If the user or group is a foreign forest principal, you must have either a two-way trust or an outgoing trust.

I ran into a problem when running the Exchange 2010 SP1 setup in an environment with a single Exchange 2007 SP3 server.  The setup failed on the Mailbox Server role with the following error: 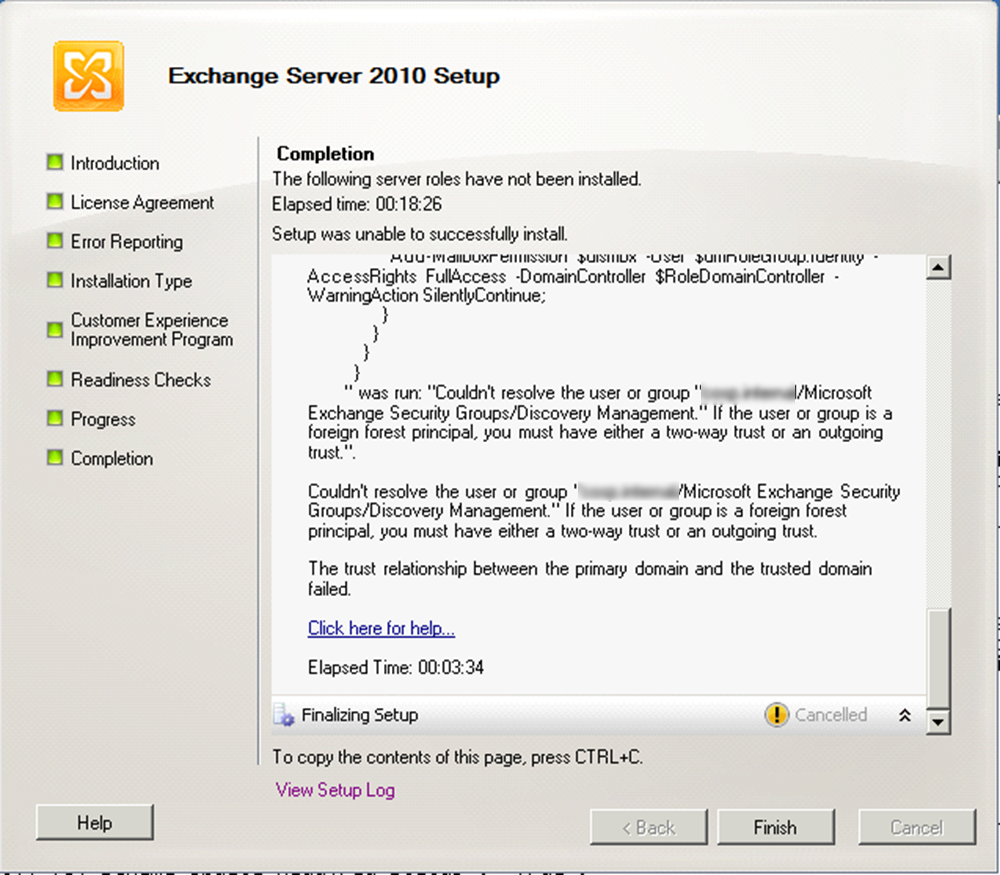 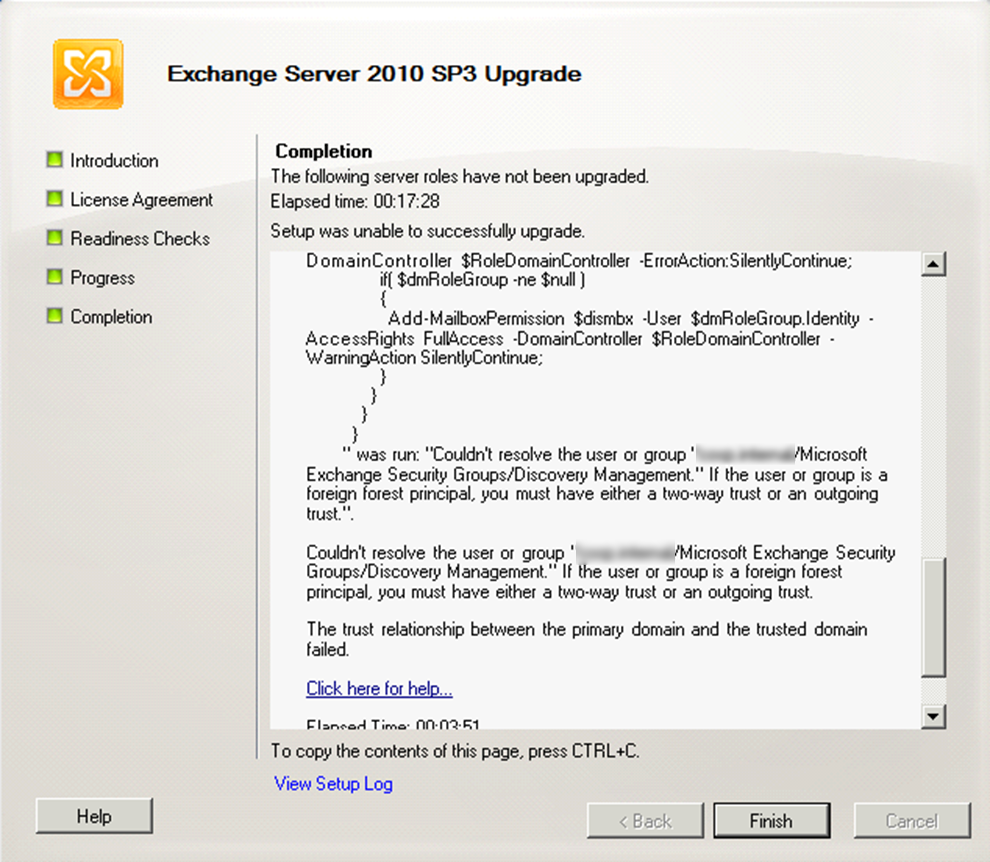 The error is stating it could not resolve user or groups for Discovery Management - there is only one discovery user created by default with Exchange 2010 called:

As a result I decided to recreate this mailbox by deleting it and recreating it.  This was done with the following commands:

Next I assigned the Discovery Management user permissions to the new mailbox with the following command:

After this I deleted the Exchange 2010 SP3 installation watermark (both the “Action” and “Watermark” entries in the registry) and re-ran setup.  Google for this, lots of information already available on the Internet. 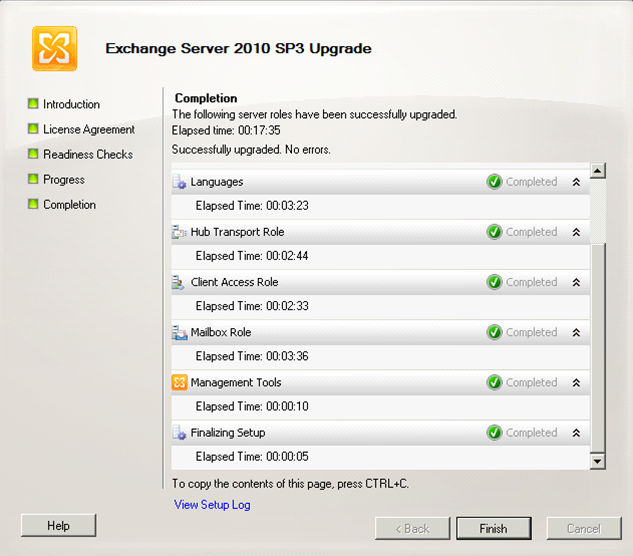 What is the SCCM Management Point?

Management Point can be defined on client computers when they are installed, or client can get the list of Management points through DNS or WINS.

Clients search for a Management Point by using the below options in the order specified:

Posted by Clint Boessen at 8:10 PM No comments: