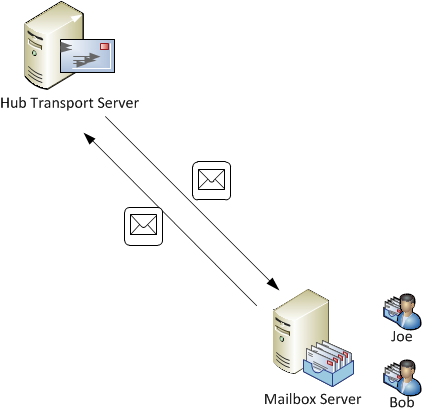 With Safety Net being redundant, you can now feel confident in configuring the database mount dial setting to a more relaxed setting other then lossless and still feel confident that email will not be lost during failover.
Posted by Clint Boessen at 2:29 PM 1 comment:

This is a short post to explain what msDS- attributes are in Active Directory.  As an administrator responsible for maintaining your companies Active Directory environment at some stage you have probably seen a bunch of msDS attributes linked to class objects such as user accounts.

What are msDS- attributes and how are they different to other attributes?

Any attribute beginning with msDS- reference it, but do not modify it unless the changes is made through the application to avoid issues in your environment.
Posted by Clint Boessen at 1:33 PM 3 comments:

With the release of Group Policy Management Console (GPMC) on server 2003, Group Policy had many sample scripts which were very handy when working with Group Policy.  These scripts included:

These scripts are no longer packaged with Group Policy Management console in Server 2008/2008R2 or Server 2012.  Microsoft however has released these scripts for download to be used with any of the later versions of the Windows Operating system.  To download these scripts please view the following TechNet website:

We experienced a very interesting problem on a Windows Server 2003 file server in which all SMB shares were removed from the file server upon reboot.  We were in the process of moving a data volume from a Raw Device Mapping (RDM) to a VMDK virtual disk file in VMware.  To achieve this we were going to perform the following tasks within the virtual machine:
Upon converting the basic volume to a dynamic volume, Windows Server 2003 asked to reboot the server.  Upon reboot, all SMB shares on the file server automatically removed themselves.  There were hundreds of shares and as a result users could not get access to resources.

To recover the shares we simply restored the system registry which can be achieved through performing a system state restore.  Windows stores all SMB shares under the following location in the registry:

We found the following Symantec article very helpful during this procedure:

http://www.symantec.com/business/support/index?page=content&id=TECH159845
Posted by Clint Boessen at 11:27 PM No comments:

I experienced an issue at a customer site with with a new Remote Desktop Services deployment on Windows Server 2008 R2 when building a Server Farm.
When Windows 7 PC's accessed a RemoteApp or attempted create a remote desktop session using the Microsoft Terminal Services Client (MSTSC.exe) they were able to connect to the farm without problems.
When an Windows XP PC accessed the remote desktop farm, the following error was experienced:
"Your computer can't connect to the remote computer because an error occurred on the remote computer that you want to connect to.  Contact your network administrator for assistance."

After researching the issue it turned out that the RD Session Hosts needed to be configured to use RDP Security as the Security Layer.  After installing a custom trusted certificate to the RDP-Tcp connection to ensure users connecting to the session hosts do not receive RDP Certificate not trusted warnings the issue started occuring. 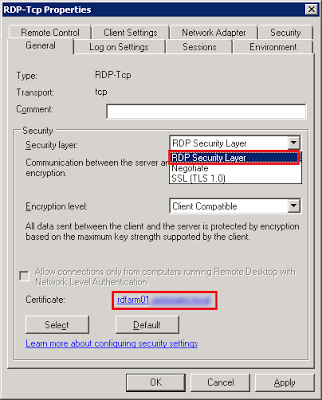 By default the Security layer was set to Negotiate.
Set all servers to RDP Security Layer in your farm to ensure both XP and Windows 7 clients can connect.
Posted by Clint Boessen at 3:45 AM 15 comments: