A customer was having an issue where Windows 7 computers randomly rebooted during the day for Windows Updates without providing a prompt for users the option to postpone updates.  This was resulting in frustrated users with computers rebooting in the middle of sending important emails, word processing tasks etc.

After troubleshooting further, we found that a deadline in WSUS was set to "Same day approval at 5:00AM".  This meant as a deadline was set at 5:00AM in the morning, as soon a computers received the update upon boot, they already missed the deadline and immediately installed without prompting users to postpone the reboot. 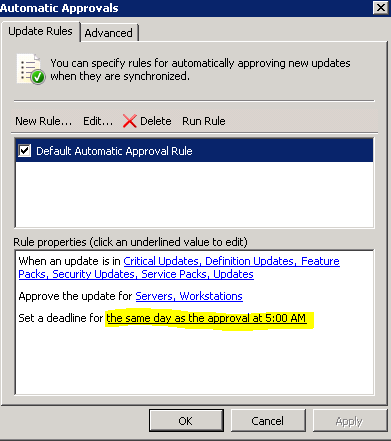 We removed the setting for same day approval and this resolved the problem.


Avantgarde Technologies, a leading IT Support Perth based company.
Posted by Clint Boessen at 6:59 PM 1 comment: