I setup a brand new windows server 2008 standard server. Installed all the latest windows updates. Promoted the server to be a domain controller then added the DHCP console. Upon DHCP setup server 2008 automatically authorized the DHCP server in active directory to provide DHCP..

I did not want the server to be authorized until i'm ready to kick it over from my old DHCP server.

When I went to unauthorize the server however I received the error:

The parameter is incorrect. 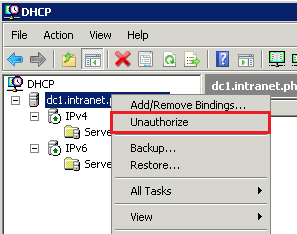 I checked using netsh to confirm if the server is authorized in Active Directory. "DC1" is the server name, which it is!

I attempted to remove it using netsh but that also failed with the following error:

This worked - weird problem!
Posted by Clint Boessen at 12:49 AM