In this blog post I will be going through some of the cool deployment stuff for Windows 7. 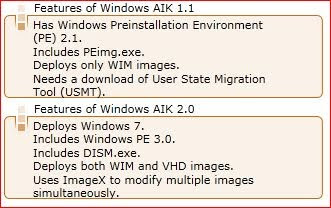 DISM.exe is a command-line tool that can be used to perform offline servicing of Windows–based images. For example, you can use it to install, uninstall, configure, and update features, packages, drivers, and international settings. You can also use it to prepare Windows PE images. DISM.exe replaces PEimg.exe, Intlcfg.exe, and Pkgmgr.exe, which are deprecated in Windows 7.

With Windows Vista to perform offline servicing you had to and the AIK 1.1 you had to:
- Mount the image using ImageX.exe
- Use PkgMgr.exe to install hotfixes, enable windows features, add device drivers, install language packs and perform other image servicing tasks.
- Use Intlcfg.exe if you needed to change the language and local settings.
- Use PEImg.exe if your preparing a windows PE Image
- Once done servicing the image you would unmount the image using image X.

Now in Windows 7 with AIK 2.0 you still need to use ImageX.exe to mount and unmount the images however there is one tool that does does all image modification called DISM.exe.

ScanState.exe and LoadState.exe are part of the User State Migration Tool (USMT) 4.0 which comes as part of the Windows AIK 2.0 pack.

The LoadState tool migrates the files and settings, one at a time, from the store to a temporary location on the destination computer. The files are decompressed, and decrypted if necessary, during this process. Next, LoadState transfers the file to the correct location, deletes the temporary copy, and begins migrating the next file.

There is loads of information about this on TechNet. Here is the home page for USMT 4.0:

Also please note that USMT 4.0 can also be used for XP and Vista... not just Windows 7.

Hard Link is a new feature of USMT in 4.0. It is designed to speed up migrations of user data. Previously copied the users state to a storage medium, whiped the disk, installed the new operating system then transfered the data back.

Hardlink Migration allows a clean install of Windows 7 to be performed while maintaining the user's settings and data on the computer's hard drive. This is possible because of hard links, a feature of the NTFS file system by which more than one path references a single file.

A network share is no longer required in this scenario. Using hardlink migration can significantly speed the migration of user state information during a Computer Refresh scenario.
Posted by Clint Boessen at 7:01 PM