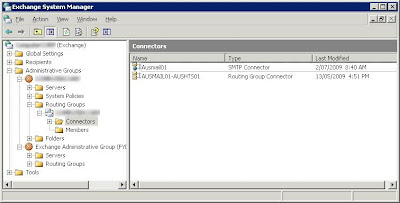 Here you can see the SMTP connector appears in Exchange 2007 as well. We also have a Send connector called "Send to Ironport" which is unique to exchange 2007.

One thing that I think Microsoft can improve is the fact there is no attribute on these connectors stating if they are a legecy SMTP connector or not. Lets look at the attributes in Powershell - you will see that they are exactly the same. An attribute defining if its legacy with a true or false would make it much more easy.

I hope you found this post informative.
Posted by Clint Boessen at 5:58 PM