This blog post looks into diagnosing performance issues with Exchange 2010.  Like most applications, Exchange performance can be effected by numerous bottlenecks within a system including:
Exchange Server User Monitor (ExMon)

The Exchange Server User Monitor also known as ExMon amongst Exchange professionals has been a great tool from Microsoft for tracking user session based utilisation of an Exchange server.  For a summary of ExMon along with a screenshot please visit the following blog post: 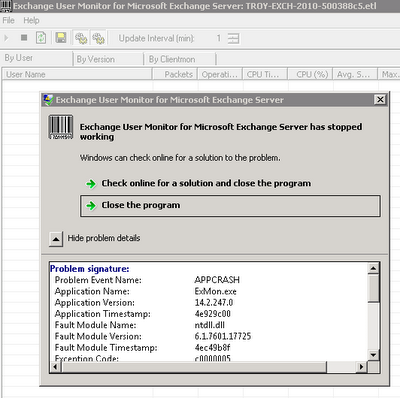 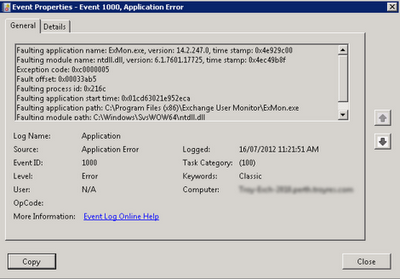 According to Xiu Zhang from Microsoft, this bug is by design when running ExMon on an Exchange 2010 server that has Client Access and Mailbox on the same server.

Performance Monitor is one of the best tools monitoring performance issues as it provides an insight into potential storage bottlenecks, CPU utilisation, memory shortages, RPC MAPI latency, Exchange Queues, Global Catalog traffic and much more.  For ease of configuration, Microsoft have created a PowerShell script known as ExPerfwiz which can be downloaded from the following site:

This script automatically creates a Data Collector Set which captures all the important information required for diagnosing Exchange performance issues.

To run the Script you must first digitally sign the script or set the ExecutionPolicy to Unrestricted.  This can be down using the following powershell command:

Run the script by navigating to the script directory and executing the following powershell command.

This creates a data collector set called Exchange_perfwiz and samples the data every 30 seconds.  This data can be generated to a report which can be viewed either in a graph or in a report.  To get to the Data Collector Set run perfmon.msc from Start --> Run.  Create a report from the Data Collector Set by right clicking on it and selecting Create Report. 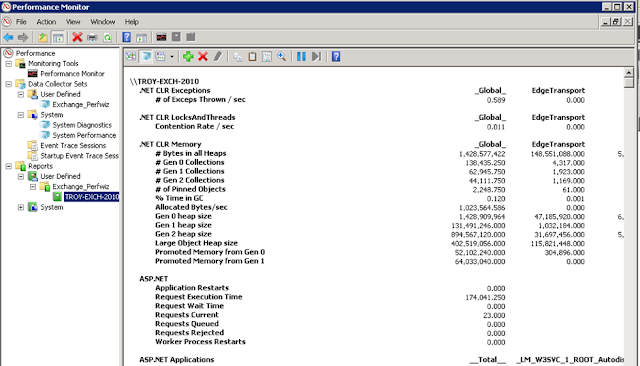 Your also able to view components from the data collector set through line and bar graphs.

Microsoft has put together a whitepaper for diagnosing Exchange performance issues.  Whilst written for Exchange 2003 many components are still relevant today.  I encourage you to have a read, it can be downloaded from the following link.

MSExchange ADAccess
Both of these counters should never exceed 100ms and for normal activity should remain under 50ms.

Another blog post which is very helpful for additional information is the one below by Dougg Owans:

http://blogs.msdn.com/b/douggowans/archive/2007/01/02/a-very-quick-guide-to-monitoring-the-performance-of-your-exchange-server.aspx
Posted by Clint Boessen at 8:24 AM