A first look into Exchange 2013

In this post I will be taking an initial look into Exchange 2013, the next release of Microsoft Exchange scheduled for release later this year.  This post contains only information which is publicly available.  Exchange 2013 is the biggest architectural change in Exchange server since Exchange 2007.

Exchange 5.5 and below is generation 1 of the product, the initial build of Exchange before Active Directory came into play.

Exchange 2000-2003 is generation 2 of the product, in which significant changes to the product were made.  From Exchange 2000 upwards, Exchange began storing majority of its configuration within Active Directory.

Exchange 2007-2010 is generation 3 of the product where we saw a huge architectural changes such as the concept of 5 Exchange server roles.

Exchange 2013, also known as Exchange build 15 is generation 4 of the product.  In Exchange 2013 we have now consolidated majority of the roles back to a single role much like it was in Exchange 2013.

When Exchange 2013 is released as RTM there will be a total of 2 roles.  These roles will consist of:
If you have a long working history with Exchange server, think of Exchange 2013 architecture as it was in Exchange 2000/2003.  Client access servers proxy the connections, the mailbox servers do all the work.

Because all data rendering for web services is now performed on the Exchange 2013 mailbox servers, all connections to the Client Access server are stateless which means that there is no need to maintain affinity between a client and an individual Client Access server for subsequent connections because all data processing and transformation occurs on the Mailbox server.  This architecture change means simple "stupid" load balances can be used with no affinity or affiliation required.  In majority of cases Microsoft Network Load Balancing (NLB) with all its weaknesses is more then enough to load balance Exchange 2013 client access.

One big change in Exchange 2013 is all client access connectivity to Exchange 2013 must come in through HTTPS.  The MAPI protocol is now just a back end protocol for the mailbox servers.  Outlook must connect through RPC over HTTP(s) both internally and externally. 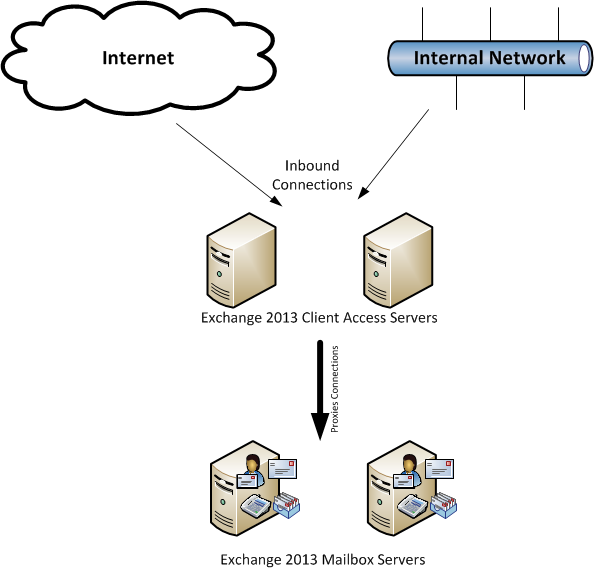 Why the big change?

Now why did Microsoft make such significant changes to the Architecture in Exchange 2013?  When Exchange 2007 released the concept of a multi-role servers, processing power was significantly less then what it is today.  Large scale deployments of Exchange 2003 which extended into the hundreds of thousands of users faced significant resource limitations due to hardware back in the day.  Microsoft needed to address this to allow Exchange to extend into larger scale deployments and as a result separate the server roles.

Due to a lot of smart people doing a lot of smart things over the years, today's servers have so much grunt we are virtualising to try and make use of it all.  This architecture of multi-role servers no longer makes sense!  In fact for large scale deployments of Exchange, as of Ex2010 SP1, Microsoft started recommending building all Exchange 2010 servers as multi-role servers and simply adding an additional server when required as a simple unit of scaling out.  The recommendations for multi-role Exchange servers can be found here:

Now the problem here is the Exchange 2010 roles have been designed to run on separate servers and when all installed on the same server they still follow the same processes to communicate with one another through a TCP network call on localhost.  This creates inefficiencies as separate roles are all operating on the same server when the roles could be more incorporated to work more as one to provide better performance.  In fact this is one of the selling points behind Exchange 2013 from Microsoft:

"been re-written in managed code to improve performance in additional IO reduction and reliability."

Whilst Exchange 2013 now has greater support for IPv6 such as Unified Messaging now supporting IPv6, a pure IPv6 environment isn't supported.  IPv6 is only supported when IPv4 is also used.

At this stage Exchange 2013 only supports the following clients:

The answer is Yes.

The popular Exchange Management Console (EMC) which was used by for managing Exchange 2007/2010 has been removed from Exchange 2013.  Administrators are provided two methods for maintaining an Exchange 2013 environment:

Exchange Administration Center is a web based administration console for Exchange.  Personally I don't agree with this decision as Microsoft has produced Microsoft Management Console (MMC) to be the standard for managing a windows network - this diverts away from the standard.

The main reason why Microsoft moved towards a web based interface for managing Exchange is due to Role Based Access Control (RBAC).  RBAC provides a granular method for delegating control to administrators.  With Exchange Management Console in Exchange 2010, when an administrator delegates a service desk operator to perform basic tasks such as create and manage recipient mailboxes, the service operator is able to perform his duty however is able to view all other features and functionality normally presented in EMC.  With EAC in Exchange 2013, the web console hides all administrative features and functionality except for the areas the user has been delegated access to.  With MMC hiding features is a difficult task which I believe is the prime reason Exchange management has been moved to a web interface.

There are also other benefits to having a web based management tools which EAC provides.  Administrators can now maintain Exchange environments from any PC with a web browser.  Yes - EAC does provide multi-browser support including all the major web browsers such as Chrome, Firefox, Safari and of course Internet Explorer.
Posted by Clint Boessen at 1:31 AM