In this post I want to address Real Time Blocklist Provides and Exchange 2013 as there are some differences you need to be aware of.  Please note RBLs are often also referred to as DNS Block Lists or DNSBL.

Connection Filtering such as IP Block Lists, IP Allow Lists and RBL Providers now run on the Front End Transport Service.  Content Filtering including the Exchange Intelligent Message Filter (IMF) runs on the Exchange Backend Transport service.  In addition to the Content Filtering agent a new agent has also been added to the backend called the Malware Agent which is responsible for detecting viruses in email messages.  The new architecture has been shown below: 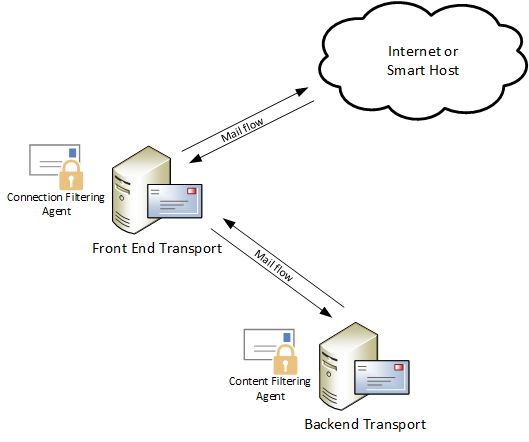 After you have installed the agent you must then enable it and restart the Front End Transport Service with the following command:
Enable-TransportAgent -TransportService FrontEnd -Identity "Connection Filtering Agent"
Restart-Service MSExchangeFrontEndTransport

Next you can begin adding the RBL providers you wish to utilise such as the popular "Spam Haus" provider with the following PowerShell command:

I added the following RBL providers in my environment:

You can verify that both the front end Connection Filter agent and back end Content Filter agents are installed and working by using the Get-TransportAgent commands as follows:

To get a summary on your top RBL Providers from these log files run the following command:

Posted by Clint Boessen at 1:30 AM