From Exchange 2010 SP1 onwards, Exchange Autodiscover now has the ability to automatically add a mailbox to a user account which has full control of the mailbox to Microsoft Outlook.  This was done by changes made to Autodiscover and the addition of a new attribute called MSExchDelegateListLink.

From Exchange 2010 SP1 onwards, whenever you grant a user full access to a mailbox, the user which was granted full access is by default added to an attribute called MSExchDelegateListLink on the shared mailbox.  This tells Autodiscover to automatically add the mailbox to the users Outlook profile.

For example take a look at a shared mailbox called "Spam" which is responsible for holding all spam emails on my Exchange server.  As you see it has 3 accounts associated with the msExchDelegateLinkList attribute one of them being me, Clint Boessen. 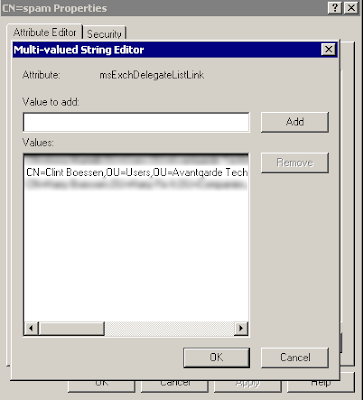 If I only want myself to receive the spam mailbox by default, I would remove the other two accounts from this attribute.  This can also be done by powershell with the AutoMapping parameter on the Add-MailboxPermission cmdlet.
Add-MailboxPermission "Shared Mailbox" -User
Hope you learnt something in this post.
Posted by Clint Boessen at 12:22 AM